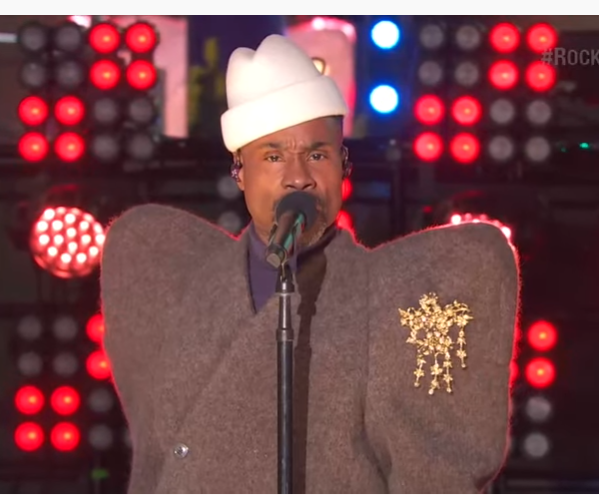 As 2020, the first year of the pandemic came to a close, our neighbor invited us to close out the year on his nicely-heated back porch. As we watched New Year’s Rockin’ Eve on the TV he had over the fireplace, we realized we were all living the dystopia of the Hunger Games.

Our horrified eyes saw this wearing an Effie Trinket costume and lip sinking to a lispy rendition of a song that should have been put out of its misery in 1967, but which has now inexplicably become our National Anthem:

The camera panned out to a few survivors of the horror well-separated and shivering in the cold, representing the various districts of our dystopia.

Then Jennifer Lopez, wearing a face cage, was wheeled out atop a giant wedding cake which she was wearing. Below her, “singers” wearing face masks pretended they were singing. Why were they even there? If they had really been singing, their singing would be distorted behind the fabric!

True to her persona, Jennifer Lopez stripped down to a see-through jumpsuit because nothing really speaks to female empowerment like stomping around half naked. ; s

As she finally strutted off leaving all dignity behind, we thought nothing could top the tackiness of that….until the twerkathon commenced.

“AUGHHHH!” I howled. “Make it stop!” Peter made similar noises of pain. Our neighbor turned off the TV and I think I stuck my head in his hot tub to make the visions go away. The producers of that show sure knew how to end 2020: with complete hatred for all.

I had hopes for 2021 which lasted for about 6 days when some frat bro types, undoubtedly fired up by the body positivity of Megan Thee Stallion, went to Capitol City and burst into the halls of Congress.

Not a single Congresscritter was harmed, but oh, how they howled and screamed.

And so, in honor of the inauguration of President Snow (played alternately by Terry Kiser and the reanimated corpse of Konstantin Chernenko), Capitol City reinforced its security with 20,000 soldiers and fencing.

In the meantime, out in District 7, the inauguration was celebrated like this:

He may not know what he’s doing, but our new president sure knows how to sign a piece of paper, and his handlers quickly produced stacks upon stacks dictatorial, er, “executive”, orders in front of him to show the people in the districts who’s the boss. Take that, pipeline workers! Suck it, female athletes! F#@k you, bootstrapping entrepreneurs!

While the journalists, who are now dressing like villians in the campy 1960s Batman TV show

are telling us how wonderful and wise President Snow is because he only takes his face mask off to spit on people he doesn’t like, like the tributes from District 11.

There’s little I can do. But my daughter has been practicing shooting with her bow nearly every day since the pandemic put us in house arrest. We’re upgrading the poundage for the limbs on her recurve tomorrow.