Local Lore, Out & About

Last June, one of my fellow hikers introduced me (and other fellow hikers) to Gilroy Yamoto Hot Springs, a former Japanese-American resort that’s now being repaired and renovated by a small non-profit group. Like most locals, I had no idea we had hot springs so close to home, nor that they were part of local Japanese-American history.

Like many of our little-known historic artifacts, like English Camp in Almaden Quicksilver Park, and the Henry Miller Masion on Mount Madonna, Gilroy Yamoto Hot Springs is well out away from regular routes. The first time I went, we drove so long along a windy back road, and then onto another even smaller road, until we reached the Hunting Hollow area of Henry Coe Park — and from there were had to go even further to some locked gates our host and docent, Dan, opened for us.

We surveyed the base of the resort, where two hotels had once stood, and burnt down. Dan filled us in on the history of the resort, which was first built around 1866 when when George Roop bought the land, and established the resort. 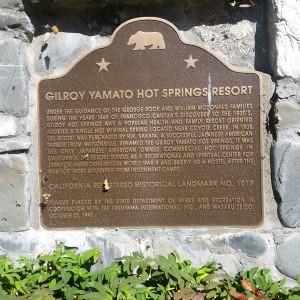 The resort attracted visitors, who’d endure a 3-6 train and coach ride to get to it, and often stayed for several weeks, bathing in the springs, since the mineral waters are reputed to cure many, if not all, ailments. During the Great Depression, the resort came into hard times and couldn’t draw visitors as it had. That’s when Kyazaburo Sakata, a lettuce grower from Watsonville, bought it and updated it into a symbol of Japanese-American success in the Valley, and a popular destination for the local community.

But the resort fell into hard times again when most of the Japanese farmers went to internment camps during World War II, and thereafter, the cost of modernizing the cabins, with, for instance, electric power instead of gas lamps, and expanding the road, was too high, and a number of fires took out buildings. The resort fell into disrepair, and by the time I saw it, most of the old cabins were decrepit and had been heavily tagged by vandals. 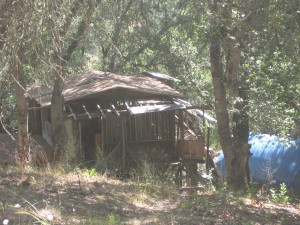 Nonetheless, it was still amazing. The separate men’s and women’s bath houses were still standing, and the women’s bathhouse has some graffiti from the 1800s which is being left on as a historic marker. 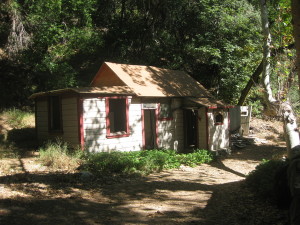 The hot springs run from up in the mountain, but the main spring is capped. 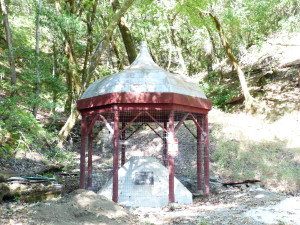 But just a little bit down the path, you can dip your hands into the warm water, and we all did. Some of the braver hikers bottled it to drink.

Dan then led us on a strenuous hike up to Lookout Mountain for a total of 7 miles round-trip, and with the last stretch to the top having a 50 degree slope. I later found out this was a popular challenge for people at the resort, and people wrote their times for making it to the top of the mountain into a log book, and race each other. Supposedly, one extreme team made it in 38 minutes! (That’s about a 9 minute mile on steep, rocky trails!) I made it to the top of the mountain, but nowhere near that fast. 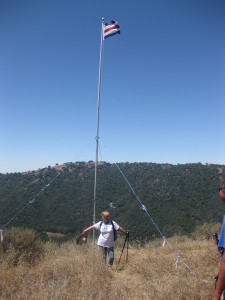 A little more than six months later, I organized another trip to the hot springs for my college alumnae group. By this time, the docents and volunteers had already managed to remove most of the graffiti, and update the Texas cabin so well that it was almost habitable, and we could go inside it to see historic photos and artifacts, like how much it cost to stay in a hotel room, and the mineral content of the hot springs. 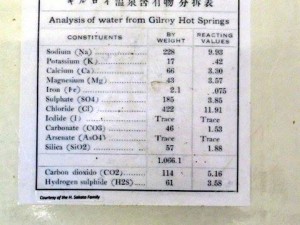 This time we stuck to the resort proper, but we had the treat of having a docent, Laura Dominguez-Yon, who was Japanese-American, and who had stayed and played at the resort when she was a child after World War II. We learned more stories about the people who’d been a part of the resort in its Sakamoto era, like Captain Kitaji, who was a Salvation Army captain.

Up on the hill, somewhat removed from the resort — deliberately, since most of the Japanese-Americans were Christian, is a former Shinto shrine, put up in gratitude by another visitor, who said the resort had cured him of alcoholism. It was built without nails, and it’s ironic perhaps that it is one of the few buildings that doesn’t need a new roof. 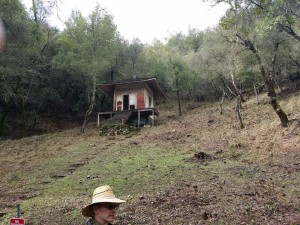 The Friends of Gilroy Hot Springs and the Pine Ridge association are hoping to restore the buildings and build a small restaurant so it can be a small-scale destination that supports itself, but it’s slow going. They earn some money from giving tours, like they did for my groups, and donations, which paid for the repair costs on the Texas cabin. What they’re particularly looking for is a camper who can stay for 6 (possibly 9 months) and protect the site from vandals. There’s free water (clearly), but no internet and no phone, and no firearms allowed. So it’s been hard to find someone who is comfortable with that, even in such a beautiful setting, but I’m sure that person is out there.

If you want to visit the resort yourself, you can schedule a tour with the Friends of Gilroy Yamoto Hot Springs, or go to the open house on October 24, 2015, which not only gives you the tour, but speakers and entertainment as well.