We had a memorable night last Wednesday, which started with a concert in downtown San Jose, and ended with meeting a serial cat killer in front of our house.

Peter and I went out to see My Life with the Thrill Kill Kult, a band we’ve been seeing live since their Sexplosion tour. At that show my friend Andy, picked up a beret and hurled it towards the stage, where a really inept opening band was annoying us. The beret landed right on top of the head of the guitarist, who lost his last semblance of cool and proceeded to get into a fight with the singer, whereupon the band left. Thereupon My Life with the Thrill Kill Kult showed up and, well, put on a very naughty show.

The next time we saw them, I pushed back on a woman who was pushing me, probably trying to crawl over my back to get into Groovie Man’s legs. I didn’t like that, so I pulled on her hoop earrings, which got her to leave.

So I am not on my best behavior at their shows. But this one went well. The show had been rescheduled from its original date 3 weeks earlier, so presumably fewer fans were there. Those that were, were of the romantic Goth variety, dancing happily to industrial tunes between sets. I even liked the opening band, though it was led by Doctor Doom. And Thrill Kill Kult rocked the stage, and reminded us why we love seeing them. I didn’t even punch the guy who jostled me, probably because he apologized for that possibility earlier, and almost certainly would have brought me a glass of the toxic substance he was drinking had I asked. 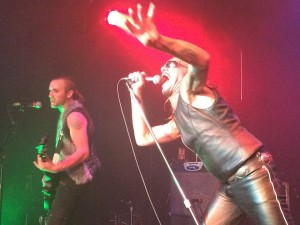 On the way back, I spotted a guy in a wheelchair sitting in the bike lane near the light rail station. Peter said he had been there already when we left, about 4 hours earlier. I thought about calling the police to check on him, but they’d do more than that. They’d tell him to leave, and maybe ask him for ID. It was a mild night, and, well, if you want to sit all night in the bike lane in your wheelchair, you should be free to do so. He was gone the next time I drove past, so I expect he wheeled on safely.

Then when we got home around 12:30 or 1 am, we saw a red sedan with its inner light on and the passenger side door open. I asked the guy within if he was ok, and he greeted us and said he was just fine. It was rather odd, but nothing was awry in the neighborhood, and he didn’t seem to be doing anything suspicious. I peeked out the window when I went to bed later, and he was gone.

But the next day, I looked at my neighborhood’s social media site and saw a picture of the same guy atop a news story. He’d been arrested just a few hours after we’d talked to him, with a dead cat in his car.

For weeks beforehand. our neighbors had been posting stories about missing their cats, or finding their cats dead with evidence of having been beaten — strange, because who would beat a cat? And recently, one posted a security video showing someone catching their cat, which thereupon went missing. It was a typical serial killer case, except in this case the victims were felines instead of people. And there he had been, in front of our house.

So while My Life with the Thrill Kill Kult has more of a sex cult than a serial killer vibe, it was a curious coincidence to run across a serial killer the night we saw them.