Performers and Audiences in the Pandemic Looking Glass 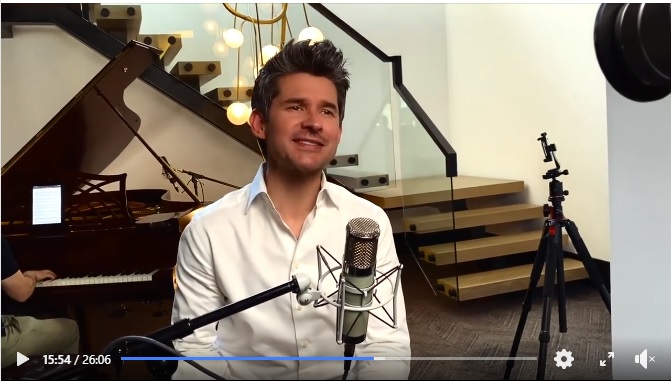 We have always enjoyed going out and seeing live shows, which were all cancelled or postponed as we deliberately distanced ourselves to prevent the spread of COVID-19. Watching recorded performances is not the same, and likely for performers, putting on a show to an empty room is also unsatisfying. But in this time, a new venue has come forth by artists brave enough to perform live to an audience they cannot see or hear. These shows are both more global and more intimate, at the same time. Now they are highlights of our week, and Peter and I have a date to watch them together, just as if we were able to see the performers at a club.

The first such show to pop up (as a surprise to us) on Peter’s Facebook feed was Matt Dusk singing with live (socially distanced) accompaniment from a beautiful large living room. It was especially poignant to see him since we had tickets to see him in March, and the show had been postponed less than a week before it was too happen.

True to his brand, his streaming Facebook Live show was classy and stylish with sparkles of old-school glamour. About a month later, he put on a similar show, this in a different room (which he called his basement). This one had multiple, mobile cameras and a camera person (or was it Dusk himself?) switching the views and zooming in and out.

Even though he has hundreds of fans watching him from all over the world, his interaction came across as intimate, as if he was putting on the show for just the two of us. At his first streaming show, he brought in his daughter who was dressed to the nines just as he was; at the second he had taken off his tie and suit jacket, and talked about the Polish performer with whom he’d done a bilingual version of Frank Sinatra’s “My Way.” He actually read the comments his fans posted to the feed! Posting makes me feel like a heckler, but Peter and I were blown away to see a response to a question I had submitted.

In the same way (just seeing him pop up on Facebook), we discovered actor & musician Charles Esten is putting out a live show each week. He pops up every so often as a special guest for Sixwire, a band we regularly go to see at Third & Lindsley, a club in Nashville (and whose March concert was also abruptly cancelled.) He is so unassuming and accessible that it’s easy to forget that he’s also a top actor in TV shows. His studio/basement is not that far from us but his fans all over the world know his internet provider is glitchy because he’d have to reboot a few times as the feed froze. (He’s changing internet providers, and his wife is working the production part of the show he tells us all, talking as if we were the closest of friends.)

Although he has a sizable catalogue of songs he’s written himself, he will often cover a piece by another artist he wants to showcase. His shows typically include remotely streamed interviews with other musicians and his fellow actors from his current TV show Outer Banks, and sometimes he performs a duet with another musician. And he will promote donations to a charity as the cover charge of our choice.

Our local free weekly advised us to watch Ben Folds’ weekly Apartment Requests, which come on right after Esten’s show. We only have one Ben Folds album, but his Apartment Request shows are amazing beyond watching him perform his songs on a “plastic” (as he dismissively and repeatedly describes it) keyboard in an apartment.

These are streaming on YouTube, not Facebook, and he’s had no technical difficulties yet, even though he’s coming online from Sydney, Australia at 9 am his time. Folds was in a tour raising relief funds for those affected by the Australian wildfires earlier this year when the pandemic hit and international borders shut down hard.

So what does a musician like Ben Folds do in quarantine? Of course, he’s writing music, but why not take on camera work, music production, showmanship, and education done all by his same self at the self same time in a weekly show. By the time we found him (Week 7) he had written his own theme song, come up with a way to “come on stage” and leave. He typically starts by showing us the local beverage he is consuming, casually chats about his circumstances, and plays song requests as they run on his feed at an alarming speed. Midway through the show he will provide a fantastic piano lesson “for kids.” It’s about how to make some cool sounds and songs easily and about playing with the piano, not the dry dull theory that can kill off natural passion.

Ben Folds manages to put this together on his own, but some performances, like acting, require on-stage collaboration. What do you do when you want to bring together multiple actors but can’t get together at a physical venue? Silicon Valley Shakespeare did the equivalent of ghost stories and an actor reading last Saturday night.

The actors voice acted the parts of a story, coming on “stage” by being present in video and exiting the “stage” from a multi-location stream on Facebook. It was uneven in video quality, but innovative and interesting. I’d certainly watch the next iteration. Plus I got to see a show in California without leaving my house!

I am grateful to the performers for creating venues that we all can go to, and I realize that the performers also enjoy the faces (they currently can’t see) in the audience. They could put on a show without us, but it’s fun for everyone to be both watched and to be watching. I look forward to seeing them in the flesh someday, but the streamed performances are a new medium with its own charms.