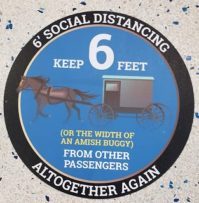 “Why was six feet the magic distance to stand apart from one another in order to avoid catching the deadliest and most dangerous virus of all time(TM) in the United States? It’s how far apart all the markers were spread to show us where to stand. That’s 1.8 meters in metric distance, and not the same distance used by other countries. I don’t think the people in China, Denmark, and France were exceptionally less infectious by nature, but they only had to stand 1 meter apart to be safe. Germany, Greece, and Portugal thought it should be 1.5 meters, which is somewhat like the American standard, but not really. Canadians must have calculated the danger of angry people swinging hockey sticks into their ‘science’ because they went all out for 2 meters of distance.” — page 52, Death to COVID and F*ck You Fauci.

Like much of the so-called science we were told to follow, the correct distance to stand apart from your fellow mankind in order to avoid spreading or catching a respiratory bug came not out of a study, but rather out of someone’s ass. And everyone took the distance with the utmost sincerity.

By August, with it being clear that this “emergency” was going to go on indefinitely, some businesses were having fun with the social distancing signage they were required to .

When I went to the Tennessee Aquarium with my daughter, they were defining the distance we had to stand apart by the size of the animals we were seeing there:

When we flew to Pennsylvania, the Harrisburg airport had social distancing markers referring to the sights in the area it served:

As of September 2020, only a few places still have social distancing markers on the floor, and often when they do, they are ignored. Soon enough, like much of the COVID theatre, they will fade away, peel off, and be forgotten.