On our recent trip through the Southwest, I found an old book called The Navaho (sic) by Clyde Kluckhohn in a used bookstore on Tucson’s 4th Ave. I’ve been enjoying fiction books with Native American characters (i.e. Sherman Alexie novels, Margaret Coel’s mystery series, etc.) and this book had chapters on Navajo spiritual beliefs, which promised to be intriguing.

I cracked the book open as we were driving towards Tombstone, but it turned out to be far more compelling than I expected and I quickly plowed through the entire book. It was written in the late 1940s, just as Navajo population was recovering from its low, and had reached a level that the area of the Navajo reservation was no longer large enough to sustain the people via their traditional subsistence sheep farming. As a result, the people were no longer as isolated and had more contact with “Anglos” but the cultures clashed, for the same reasons they always had. The author managed to understand the Native point of view, and was explaining how it was different so that we could get along better, with just a few adaptations.

There’s already a few things I’m aware of in Native culture, for better or worse. A Native might not tell you something you didn’t specifically ask about. For instance, when we were in Seattle, Peter called a comic book shop to find out where it was located, and got directions. When we got there, the store was closed, with posted information that it wasn’t to open for another hour yet, and we called back. We got a profuse apology, but I noticed the person on the other end of the line had a Northeastern Native accent, and I just knew it happened because we hadn’t also asked the equally important question of when do you open. Likewise, there’s also Indian Time, which is not the posted time, but rather the time when everyone gets there. It works both ways: you might have to wait for a store to open, or you might not have to put up with a surly clerk giving you the stink eye through a locked door if you’re hoping to get in 5 minutes early. Indian Time makes sense in rural, rough terrain, especially with unreliable modes of transportation. Better to practice a little patience than to have someone die rushing to get there.

The earlier issue — of not getting information about something you hadn’t asked about — was certainly a problem for Anglo settlers. If you came along and asked the head of a local clan if you could set up a homestead over by the creek, without fear of retaliation from his clan, he might certainly say yes — because that area just happened to be someone else’s territory. So then when that other clan took righteous offense at some strangers squatting near their flock’s watering hole, the settlers got equally offended, having believed they had been dealing with liars and thieves. But for the Natives, it would be offensive to imply that the others were ignorant of something they hadn’t asked.

I found the linguistic differences between English and Navajo one of the most interesting chapters. To speak Navajo is a different state of mind, and at the time of the book, 71% of the people only spoke Navajo. In particular, it’s verb centric, and a lot of what’s happening is within the verb itself, and Navajo has a lot of different verbs. For instance, if you want to say “we went to the store,” there’s a myriad of verbs you have to choose from, depending on some specifics. Was it you and me who went to the store, or a group of us? Did we walk, drive/ride, go in a wagon, or fly there? And if we went by car/horse (i.e. rode), how fast did we go there: walking pace, trotting pace, running pace? On top of that when you drop, put down, or reach for an object, the verb includes whether that object is round, pointy, hard, soft, etc. Oh, and it has tones, like Chinese, and it’s less forgiving of tonal mistakes. In one way it’s not idiomatic (you can’t say I flew over to say you rushed unless you really flew) and on the other, it has the possibility for infinitive dry wit, as you can say “the round object is being put in place” as the fat guy sits down.

As it turned out, our travels took us right around Navajoland, and even (unexpectedly) to it. But to begin, all through Arizona and New Mexico, there are roadside stops along the freeway which sell Indian jewelery and blankets. The book I’d read said the Navajo would sell blankets of their own design, but preferred to buy and use Pendleton blankets for their own use. Looking at the label on one of the blankets in a roadside shop, I saw the currently offered blankets were neither Pendleton nor Navajo: 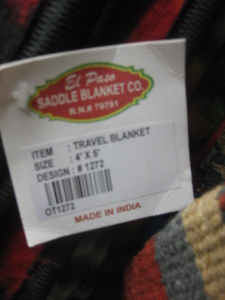 There were people here and there throughout our trip who I thought might be Native, or not, but when we got to Santa Fe, the local Natives were clearly out and about. There were Native artisans all along the Palace of the Governors selling their own wares. The craftsmanship was way beyond the pounded aluminum bracelets with blue stones in the roadside shops. I shyly stopped to examine a $15 guitar pick made from pounded copper inlaid with an intricate silver design, even though I have no practical use for such a guitar pick, nor for jewelery. An accordion player and his friend were busking in the square: 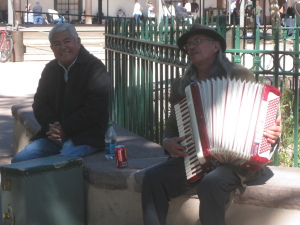 But Santa Fe was not our style. Peter described it as the art festival that took over a town. That isn’t a bad thing, but our scruffy road-worn family didn’t jibe with the posh retirees and the twee faux-dobe. I was so intimidated by the upscale of the place, I was terrified to ask any of the craftspeople if Navajo art would still have one element missing, for good luck, as Kluckhohn had described. And I never did ask anyone.

Two days later, after seeing the VLA, Pie Town, the Petrified Forest, and a portion of Route 66, we had planned to spend the night in Winslow. But Winslow was just ugly, in a bad, bad way. And the Tripadvisor reviews of the available motels cited homeless people panhandling in the parking lot and others trying to sell used bedsheets in the lobby, we decided to move on to Flagstaff, even though it meant having to double back to see the Meteor Crater (which it turns out, wasn’t worth doubling back for.)

And what to our weary eyes should appear, off Route 40, but a big, bright shiny casino-resort? We drove over to see if they had any rooms within our budget limitations. It turned out we’d driven right into Navajo territory. The staff was all Navajo, with just a few exceptions. And here I was, without a Navajo-English phrasebook. 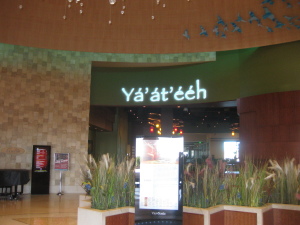 But luckily, the people were well-prepared to host weary Anglos. On a Friday night, we got a posh, posh room for $116 and with a Player’s Card, a buffet dinner for $10/person (that included mutton stew!). I was relieved to see the gift shop sold Pendleton blankets, not scratchy looking blankets with geometric designs made in India. And it was a pleasantly comfortable place to have my children, which is rarely the case for a casino. We ended up working out all together in the fitness center, whereupon Peter quipped we’ll always be saying remember the time we went to the rez and decided to all work out together?

The guest room had a Discover Navajo magazine which encouraged us to check out the area, and told me about current Navajo protocol. For instance, people don’t like to make eye contact, which explained why some of the people in the casino seemed shy, when they were actually being polite. People also aren’t really into touching people they’re not related to, so no hugging, firm handshakes, or shoulder pats. A kiosk in the lobby told me the entire building had been designed with traditional Navajo beliefs in mind. I actually enjoyed that the most, since it was ethnic, but modernly stylized, so you didn’t get that museum feel. I did feel lost culturally, afraid that some of my questions would be offensive. But I will say Kluckhohn was concerned about the future of the Navajo in 1948, as they faced the struggle of how to preserve what they loved about their own culture as they had to adapt to American ways in order to succeed economically. He would have been pleased to see such a resort that incorporated Navajo into an American-style enterprise, as well as craftspeople being recognizable for their own work and quality thereof. I’d barely expected to meet any Natives on our trip, and instead, I met a lot, and learned a little.