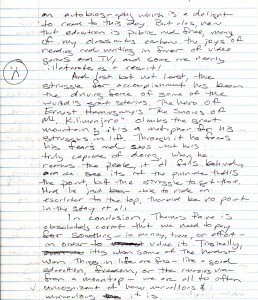 I’m a professional writer. This is my SAT essay. I misspelled “illiterate” and reference a story I never read. I also have no illiterate classmates.

Last November, Neil took the SAT for the first time. At least one fellow homeschooler has opined that someone as accomplished as Neil needn’t jump through such a hoop, but the sad fact is that many scholarships are tied directly to having an SAT score, and, after all, it didn’t seem like such a stupid hoop at the time.

We were both thoroughly flabbergasted when his score was drastically affected by his essay score. We got the essay back, and it was his typical style of a well-thought out answer giving his opinion, but giving the counterpoint as well. There were no spelling or grammatical mistakes, and he’d managed to put in several solid examples behind his point of view, and managed to get in a conclusion within the 25 minutes. That in itself is miraculous, since he typically spends hours researching and thinking about his papers. For that, he got a 3 (out of a possible score of 6.)

We quickly did our research, and discovered that the SAT essay test has nothing to do with testing writing ability. According to several sites and SAT preparation books, the key to getting a good score on the SAT essay portion is to 1) stick to your opinion like a wart on a toad, 2) write big and fill both pages, and 3) use the longest, most pretentious words you possibly can. Obsequiously referencing long books and tedious chapters of history may help. Being coherent, and factually accurate are completely optional.

Just the thought of it made me want to break out in a primal scream. My lifelong career has been as writer and editor. I would like to think I’ve taught my son well, and besides writing literature essays for me, he writes this blog, and has written puzzles for The New York Times.

But if he needs to learn how to write crappy essays in 25 minutes or less to get a good SAT score, that is a useless skill which may be learned (and hopefully unlearned afterwards.) We’re practicing now, and in sympathy, I’ll spew out an essay on the same prompt alongside my son, and then we compare. It is amazing what nonsense even this experienced writer will fart forth, given the real constraints of this test. Our first effort was so embarrassingly vile, both papers had to be put to the shredder lest an innocent person with any critical thinking skills be poisoned by its prose. Just to give you an inkling of what you’re missing, I spent half of it referencing War and Peace, which I have never read.

I truly out did myself today, however. I misspelled “illiterate” and rambled on about “The Snows of Kilimanjaro” which I have also never read in my life, and got it epically wrong. Well, I did get the author right. And I did fill both pages in BIG almost-legible writing. And I used the words “eschew,” “hencetoforth,” and “perspicaciously” correctly. I think. I’m also not sure what “perspicaciously” means, but I know it looks like a big, pretentious word which will hopefully impress the grader. And that is what these essays are scored on, so I bet it’s worth a “5,” if not more.

Update: Neil ground away at mastering how to write an SAT essay (via excellent tips and strategies in Shaan Patel’s SAT 2400) and got a 6 on his essay, as well as a perfect score on the other questions.