The 2013 Celebration of Mind at Stanford

The 2013 Celebration of Mind at Stanford was a cross between previous events: as in 2010, it had a series of speakers on various topics about recreational mathematics, and like the 2012 event, it had a strong component of hands-on exploration.

Peter was out of town, so this time, Neil and I brought Kelly along. We arrived a little early, as tables were still being set up in the lobby of Cubberly Auditiorium. Kelly took advantage of this fact to snag a spot in order to show off her own origami, and when Bill Gosper showed up, he set up some of his own puzzles. Now that Neil has been hanging around math and puzzle people for several years, he knows several of the local people in that field, and for us, this intimate event had the feel of a party. I briefly spoke to Gary Antonick, who’d brought his daughter and several Newton’s cradles. I spoke to Nancy Blachman, who showed me a preview of a video that’s being created to promote the Julia Robinson Math Festival. She introduced me to mathematician Ravi Vakil, who magically managed to get her logged onto Stanford’s Wifi network without he or she having to touch her computer. I saw Elwyn Berlekamp, and rushed to get a picture of him before the hordes of eager players swarmed him to play Dots & Boxes. 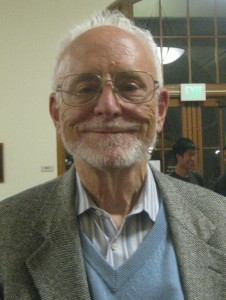 Berlekamp charmingly invited me to play Dots & Boxes with him after the talks. I love Dots & Boxes as a fun, zen-like little game, but I was far too intimidated to play against someone who has studied it so much he’s been able to develop theorems around how to win it.

Stan Isaacs (the event’s organizer) had to break the attendees away from their activities and chatting to round us up and get us into the auditorium, where the official show was to start.

Our MC for the evening was Rick Sommer, who manages many of Stanford’s youth programs, like their math circle, their new science circle, their online high school, and helps groups with similarly-oriented events, like this one and the Julia Robinson Festival, find a place to meet at Stanford.

Scott Vorthmann was up first with the next rendition (up from the previous year’s tricks) about what you can do with Zometools and bubbles. This time, he bubble elevator had four stories to escalate, and we gasped in amazement at his 3D Zometool Hilbert curve. I forgot the name of this shape, but it, too defied convention, and typical toy making: 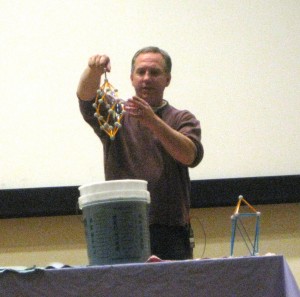 Gary Antonick was next up to tell us about Newton’s Cradles. To my surprise, they’re a relatively recent invention, though they played a big part in Neil’s 8th grade physics education. He quizzed us on what we thought would happen in two of the balls on a Newton’s cradle were welded together, rather than being able to transfer energy. We’d done just such as experiment (albeit with taping the balls together, not welding them), and both Neil and I remembered the result differently. It’s time for us to revisit our physics lab!

Bjarne Toft, a visiting scholar from Denmark, told about Hex and its inventor, Piet Hein (as well as acknowledging John Nash independently discovered it a few years later. He also told us Hein invented the Soma Cubes. We’ve seen both (in large versions appealing to kids) at the Lawrence Hall of Science. Toft told us Hein had published Hex puzzles in Politiken, and had corresponded with Martin Gardner, as well as written some cute poems. Later, Kelly pointed out that the floor of the Cubberly Auditorium entrance hall was essentially the board for a game of Hex.

Scott Kim moved on from Toft by telling us more about Soma, and how it has influenced or been reflected in games since, like, um, Tetris, and Thinkfun’s Block by Block. He introduced his new game Block by Block Jr. and invited audience members to come up and use a version made with cardboard boxes to build one of the most difficult puzzles — an ostrich, which will not balance until and unless it’s been completed correctly. 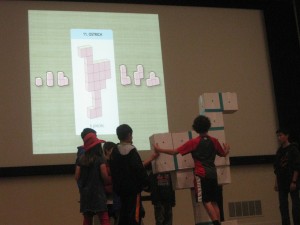 The team of teens and tweens quickly assembled the ostrich successfully, but were dubious about its stability. But once they dared to step away, it balanced successful by itself for several minutes until just before our magician, Jordan Gold, was about to go on.

Gold is the only person to receive a bachelor’s degree for magic (which he received from the University of Indiana.) He showed us several examples of ambigrams, and the playing cards he’s designed which have no up or down. Then he made a mini guillotine cut through a volunteer’s finger (without cutting the finger) and introduced us to a box which tied the objects within it together, even as they went in as separate items.

Stan Isaacs told us Russian game designer Serhey Grabarchuk had recently moved to the Bay Area, and was here. Neil eagerly rushed out to talk to him after the show concluded: 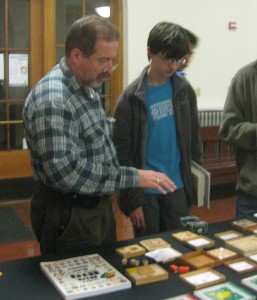 Most of the other guests at this Celebration of Mind were tweens and teens who also love recreational mathematics. As I’d expected, they swamped Berlekamp to take him on at Dots & Boxes, while others tried to solve puzzles which Bob Hearn, Stan Isaacs, Bill Gosper, Nancy Blachman, and Grabarchuk had brought: 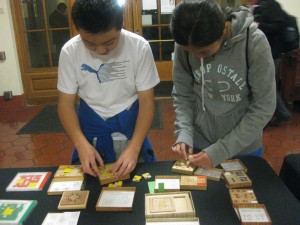 Kelly even found a few takers for her origami. I forced my kids to leave at 9:30, because, well, that’s late.