The Coat Came Back

I enjoy following James Altucher’s postings and last night, I would have sworn he wrote a post about losing a new coat he’d just bought.

It made me think about my favorite coat, which was also once lost, and came back.

It’s a trench coat I bought in 1981 or 1982. I don’t remember what it cost, but I liked the classic style. It cost less than a London Fog coat, which I couldn’t afford, but it looked close enough, and it had a removable wool lining, so it could be worn for style regardless of how cold it was. For more than 30 years now, it’s been in my closet.

I remember wearing it over my bathing suit to keep me warm at a swim meet.

I remember wearing it during my first summer in San Francisco, which, just as Mark Twain once noted, can get pretty frosty in July.

I remember getting it back from the coat check at a dot.com party in 1999, when I described it as a London Fog trench coat, even though it wasn’t.

My husband’s job sent him to a UX conference in Amsterdam, and thanks to a KLM “bring a friend” special, he took me along. Once we arrived, I decided to visit my friends in Sweden, whom I hadn’t seen since 1987. I was travelling by train, and on my way back to Amsterdam, I hung up my trench coat on the train from Stockholm to Copenhagen. It wasn’t until I was on the train from Copenhagen to Amsterdam that I realized I’d left my coat behind. I told the Danish conductors that I’d lost my coat, and they took my information, but I didn’t hold out much hope of ever seeing my coat again.

Six weeks later, a package from Denmark arrived at our apartment. It came from the US Consulate in Copenhagen, which had been given my coat, my address, and my nationality, but not my name. Addressed to “US citizen,” a nice letter on the inside informed me that my coat had been given to them with the request to send it back to me. And, so I learned that among its many duties, the State Department will also reunite US citizen’s lost belongings with their owners. The coat reeked of smoke, but otherwise, it was just as I had left it.

The coat isn’t worn as often as it used to be. These days, it mostly hangs in the back of my closet. I lost its belt many years ago, and found a black trench cost with a belt at a thrift store for $30. I don’t wear that coat much either: these days my more casual wardrobe takes a jacket instead, and on more recent trips, my coat of choice was brown leather jacket which has an inner pocket where I can stow stuff rather than in a purse.

Yet I still love the coat, and recently my son took it to complete his Doctor Who costume for Halloween: 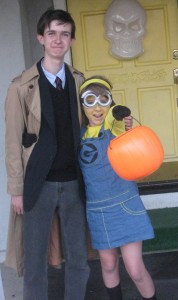 The funny thing is that when I woke up this morning, after having thought about my coat, I couldn’t find James Altucher’s post about his lost coat. Did he find his coat, and take the post down? Did I just dream about such a post? I don’t know. But if he was meant to have that coat, it will find its way back to him, just as mine did to me.